Waxwork I: Portrait Built by Honeybees

Honeycomb built by bees in an oversize hive, on commercial sheets of honeycomb foundation, installed in a light box made of red oak. The bees worked within areas defined by a mold around the artist’s head.

Digital prints encased in beeswax, immersed in a hivebox for three months, then placed within a custom-built observation hive made of etched glass and red oak. These observation hive are inhabited by live bees. 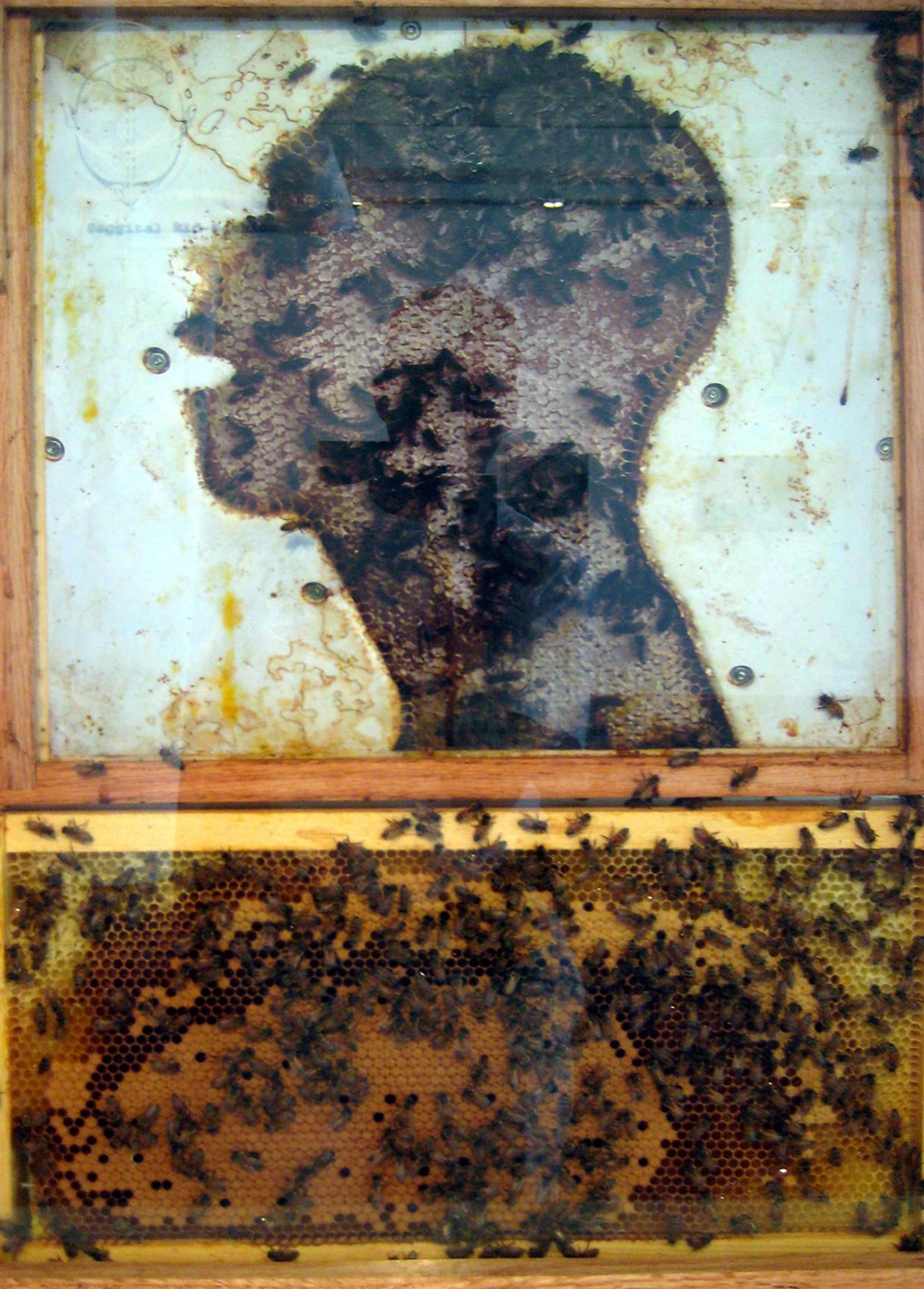 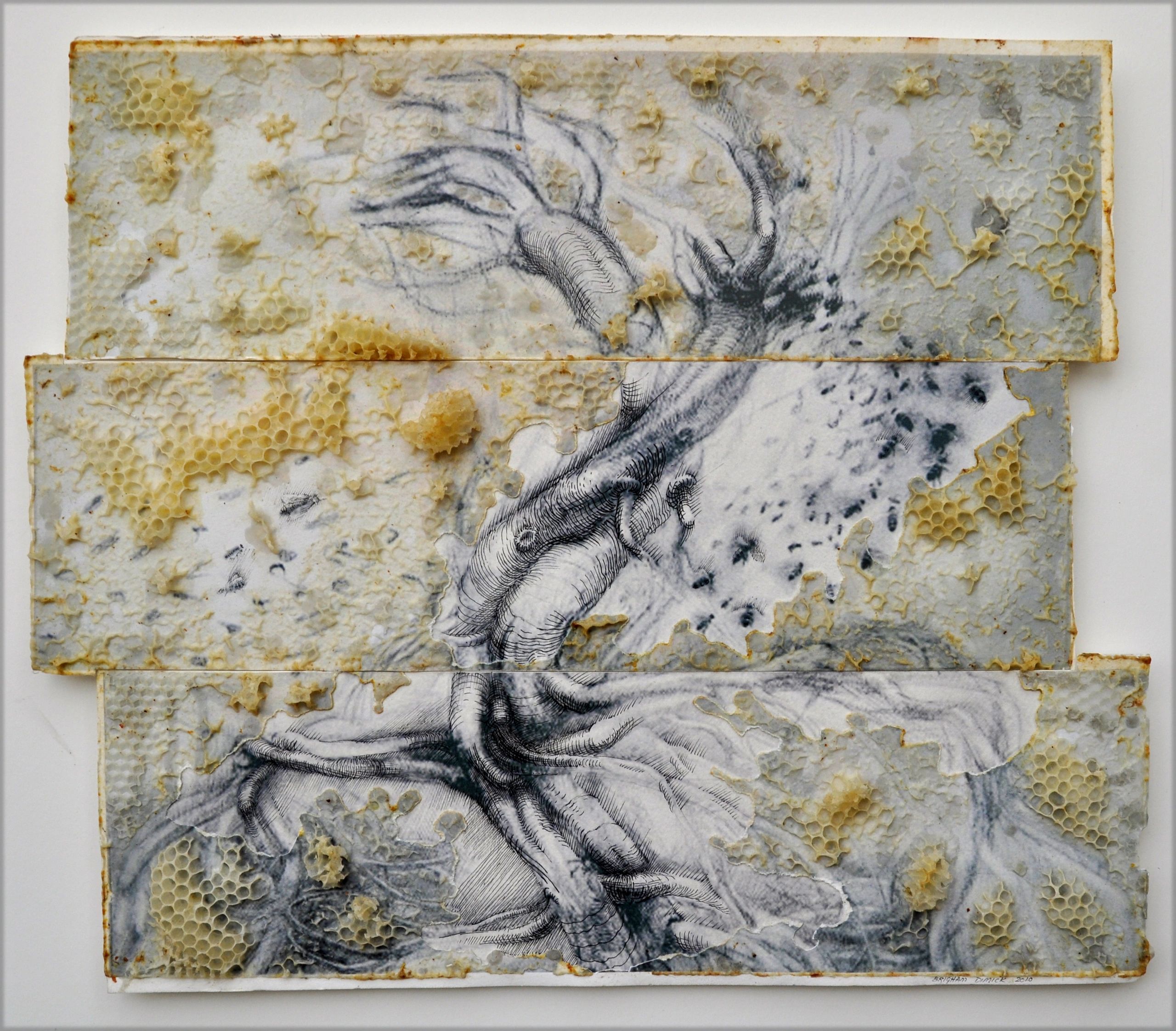 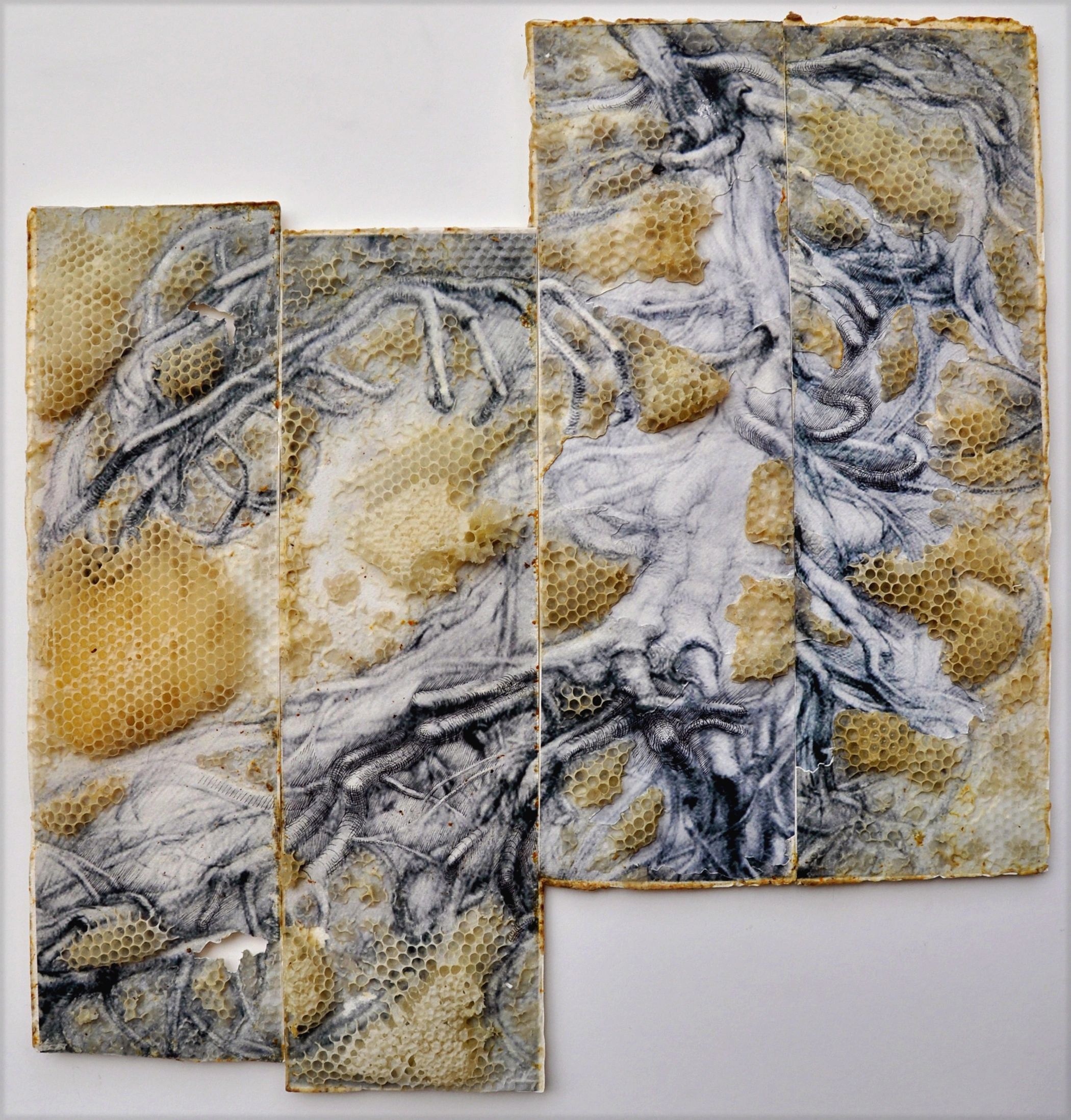 photographs of drawing immersed into beehive and then overdrawn with ink, with stamped copper

Allergic to all forms of hymenoptera (stinging insects), I work with honeybees to create a conceptually meaningful relationship to material and process. On one level, Waxworks I is an effigy, saggital sections of the my head offered to the bees. On another, it is an example of how I collaborate with these amazing architects of the animal kingdom whose own existence is threatened due to Colony Collapse Disorder. Artists often work from traumatic personal experiences. These experiences help one to consider mortality more honestly, and serve as sources for re-imagining how an image can be created. In August of 2003, two stings on the my hand led to near-fatal episode of anaphylactic shock. Since then, three more episodes of anaphylaxis have occurred, two in the allergist’s office after being injected with small amounts of venom. Because intervention was more rapid during those later episodes, I remained conscious longer and hence, remembered the experiences more vividly. Though frightening, these experiences have been valuable in locating specific metaphors about process and material in relation to self-portraiture. How process and material interface with representation has been a central concern in contemporary art. One of the legacies of Minimalist art has been its focus on materiality.   That is, that the physical substance of the artwork is central to its meaning. In Waxworks I, honey is stored in wax cells that have been built by bees in my likeness. The very insects that placed me in mortal danger inhabit the void of my body. In Waxworks II, three observation hives are displayed with live bees. Images within these hives represent different stages in the process of making Waxworks I, from the plaster head being encased in plastic (left hive), to a photograph of bees working industriously inside the saggital mid-section, to a representation of my head partially submerged in white liquid (right hive). The images are encased in beeswax to promote the bees in these hives to build comb directly onto the images while simultaneously encouraging the bees to efface my likeness. Other works in the series involve immersing drawings and prints into the beehive, allowing the bees to build comb onto them while also chewing the paper. Many of these works depict a human figure as a botanical illustration, in which the branches move through the body as a vascular system. These serve as allegories of anaphylaxis, in which vessels dilate and blood pressure drops, after being stung while trimming the bushes (represented by the woody branches).